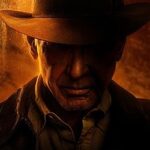 In 1969, American archaeologist and adventurer Indiana Jones lives against the backdrop of the Space Race. Jones is uneasy over the fact that the U.S. Government has recruited former Nazis to help beat the Soviet Union in the competition to make it to space. His goddaughter, Helena, accompanies him on his journey. Meanwhile, Jürgen Voller, a NASA member and ex-Nazi involved with the moon-landing program, wishes to make the world into a better place as he sees fit.