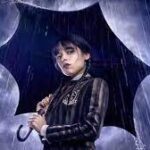 Probably one of the better series if not the best on Netflix Wedensday is getting a second season. Even though Netflix in the last couple of years has been getting better in the renewal department of hit shows its still an unpredictable streaming service that at times has canceled or cut short really popular series. So even though I held high hopes for a second season it’s after all Netflix, a streaming service no matter how extremely high the ratings are, the super positive fan reaction, the often cranky critics that gave the series a fantistic reactions and lets not forget the fans again that grew into a cultish following it is never really written in stone that the streaming sevive would place the order for that second season. But they did at that. So we will be looking out for the dates that it will drop on Netflix and post it. My bet it will be around October beasue well Halloween of course.

Double the trailer here with a tweet from the girl who sold the part of Wedensday. Jenna Ortega.

Thanks to everyone who made this upcoming season possible. This has all been pretty surreal https://t.co/cIeJLr9qwh