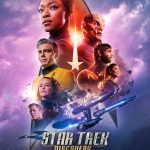 About From CBS Official Website Star Trek: Discovery
Star Trek, one of the most iconic and influential global television franchises, returns 50 years after it first premiered, with STAR TREK: DISCOVERY. The series will feature a new ship, new characters and new missions, while embracing the same ideology and hope for the future that inspired a generation of dreamers and doers. The series will premiere on the CBS Television Network with all subsequent episodes available on CBS All Access.

Before Kirk, Spock and the Enterprise there was Discovery. Now, one of the most iconic and influential global franchises returns to television with Star Trek: Discovery.