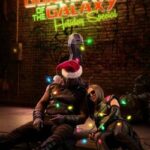 If you haven’t already seen or were aware of it. Guardians of the Galaxy have a very festive special that is now streaming on Disney +. It’s worth giving it a whirl especially if you are a fan of all things Marvel and the franchise. Personally I found it enjoyable even with all its delightful goofiness.

The Guardians of the Galaxy purchase Knowhere from the Collector and take in Cosmo the Spacedog as a new member. As Christmas approaches, Kraglin Obfonteri tells the Guardians the story of how Yondu Udonta ruined Christmas for Peter Quill in his childhood. Mantis discusses with Drax on finding a perfect Christmas present for Quill, as the latter is still depressed following the loss of Gamora.[a] After brainstorming for ideas, they decide to go to Earth and retrieve Quill’s childhood hero, actor Kevin Bacon.

Mantis and Drax arrive in Hollywood, Los Angeles, where they attempt to search for Bacon. After spending time at the Hollywood Walk of Fame and a bar, they acquire a map of celebrities’ residences and locate Bacon’s home in Beverly Hills. Bacon, who is waiting for his family to come home, is terrified by the appearance of Mantis and Drax, and attempts to escape. Police arrive to help, but Mantis places them and Bacon in a trance before taking Bacon with them. As they return to Knowhere, Mantis and Drax are disappointed to learn that Bacon is an actor and not a real-life hero. Later, the Guardians surprise Quill with a Christmas celebration, but Quill is horrified to learn that Bacon has been kidnapped against his will, demanding that he be returned home. On the Guardians’ new spaceship, the Bowie, Bacon learns from Kraglin how he inspired Quill’s heroism, and decides to celebrate Christmas with the Guardians before returning home.

After the celebration, Quill reveals to Mantis that Yondu eventually changed his mind about Christmas and gifted him a pair of blasters which now serve as his primary weapons. Mantis confides in him that she is Quill’s half-sister, after years of refusing to tell him the truth out of fear of reminding him of his father Ego‘s misdeeds,[b to Quill’s surprise and elation.

The Guardians of the Galaxy Holiday Special | November 25, 2022 (United States)