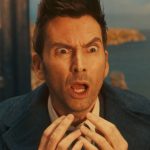 New trailer dropped the other day for the upcoming Doctor Who series starring David Tennant as the 15th Doctor who use to be the 10th Doctor who married the 5th Doctors daughter who was basically his daughter who was cloned from the 10th Doctor in the episode The Doctor’s Daughter that died on May 10th 2008.Confused. Me too. Have no idea why I wrote that other than I thought that was amusing. plus… Wow! That is a hell of a run on sentence.