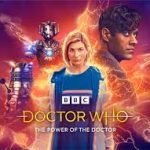 As the Doctor Curator Tom Baker once said to Matt Smith’s Doctor some of the old faces will be revisited. Only the favorite ones.  So is it with the the 14th Doctor and the return to the small screen of David Tennant who has been confirmed  as the Doctor but not as the 10th but the 14th Doctor giving the possibility of a whole new persona for the Doctor. Wildly popular as the 10th incarnation of the Doctor he is a perfect fit to revitalize the franchise and as the new/old show runner Russell T Davies has written its gonna be some adventures before the 15th Doctor makes his appearance. 3 new episodes to be exact according to BBC. Length of the episodes are not specified and I am hoping they are 3 very long ones with multiple episodes  with each episode to string it a long a bit.

“If you thought the appearance of David Tennant was a shock, we’ve got plenty more surprises on the way. The path to Ncuti’s Fifteenth Doctor is laden with mystery, horror, robots, puppets, danger and fun! And how is it connected to the return of the wonderful Donna Noble (Catherine Tate)? How, what, why? We’re giving you a year to speculate, and then all hell lets loose!“

The episode leading up to his appearance saw the 13th Doctor (seems its an unlucky number even for the Doctor) Jodie Whittaker’s was probably one of the best of the bunch from the 13th Doctors . Not because of Jodies acting or her role as the Doctor. Far from it. She was brilliant in the role. In my opinion and many many more it was the show runner  story arc and the scripts that let the show down. Sort of like what happen to the American Doctor Who movie which I thought had so much of the necessary  ingredients with the actors and effects to make a go of the show but the writing was weak .So eventually became the red headed step child of the franchise. Still kind of liked it if I am honest. There were plenty of poor episode of the main BBC productions that would of fared well in comparison.  But we got to see the 8th Doctor(Paul McGann) in the Power of the Doctor which with the cameos of the 1st (David Bradley),5th (Peter Davison), 6th (Colin Baker) and the 7th (Sylvester McCoy ) along with some returning companions of the past Ace (Sophie Aldred) and Teagan (Janet Fielding)made it a pleasant send off for Jodie bringing her back into the the original story arc rather than the endless child story arc. Though elements of that story was in the episode but very much water down. My thinking in the future you may see it either being explained in a different way or totally dropped just like most of the elements of the 8th Doctors movie was.  Below is a hidden spoiler of the episode from Wikipedia which is pretty thorough. Click to open if you didn’t see the episode or are curious. If you want to see the episode first just leave it be and ignore.

For Plot Summary by Wikipedia Click Here
The Doctor and her companions rescue a bullet train in space from an attack by a group of CyberMasters, but Dan is nearly killed during the escapade. Having developed a sense of his own mortality, Dan parts ways with the Doctor to get back to living his life. A renegade Dalek contacts the Doctor, offering information about a Dalek plot to destroy humanity.

The Doctor’s former companions Tegan Jovanka and Ace McShane investigate the abduction of several seismologists and the addition of Grigori Rasputin’s face to fifteen famous paintings. Kate Stewart invites the Doctor to UNIT’s new London headquarters to meet Tegan and Ace and to pass on their findings. There the Doctor clarifies that the new face in the paintings is in fact that of the disguised Master in his latest regeneration, who she goes to confront.

The Doctor learns that the Master and his CyberMasters have teamed up with the Daleks and enslaved an energy being called the Qurunx, to end humanity by setting off eruptions from all volcanoes on Earth simultaneously. The Doctor meets the renegade Dalek, but discovers the other Daleks had allowed it to contact her in order to entrap and capture her, which they do after killing the traitor.

The Master is arrested by UNIT, but reveals he sent a miniaturised Ashad to Tegan, pretending it was a gift from the Doctor. The miniaturised Ashad enlarges and acts as a portal to bring troops of Cybermen into UNIT HQ, freeing the Master. The Daleks take the Doctor to 1916 Russia and hand her to the Master, who uses Gallifreyan technology to force her to regenerate into him. Meanwhile, in the Doctor’s mind, the Doctor encounters manifestations of her First, Fifth, Sixth, Seventh, and Eighth incarnations, who inform her that it may be possible to undo the Master’s forced regeneration with help from the outside.

An AI program the Doctor created, taking the images of the Fifth, Seventh, Fugitive, and Thirteenth Doctors, leads Ace to meet with fellow former companion Graham O’Brien and destroy the Dalek volcano machine, Tegan to destroy the Cyberman converter created in UNIT HQ and the CyberMasters before they convert Kate, and Yaz and previous ally Vinder to capture the Master and force him to undo the Doctor’s transformation. Defeated, the Master mortally wounds the Doctor with the Qurunx’s energy beam, causing her to begin her regeneration.

The Doctor takes Yaz home before departing to regenerate alone. Yaz attends a support group of former companions including Graham, Dan, Kate, Ace, Tegan, Ian Chesterton, Jo Jones, and Melanie Bush, who discuss their adventures. The Doctor regenerates into the Fourteenth Doctor, who is physically similar to his tenth incarnation.

The Power of the Doctor Trailer BBC

The regeneration of the 13th to the 14th Doctor